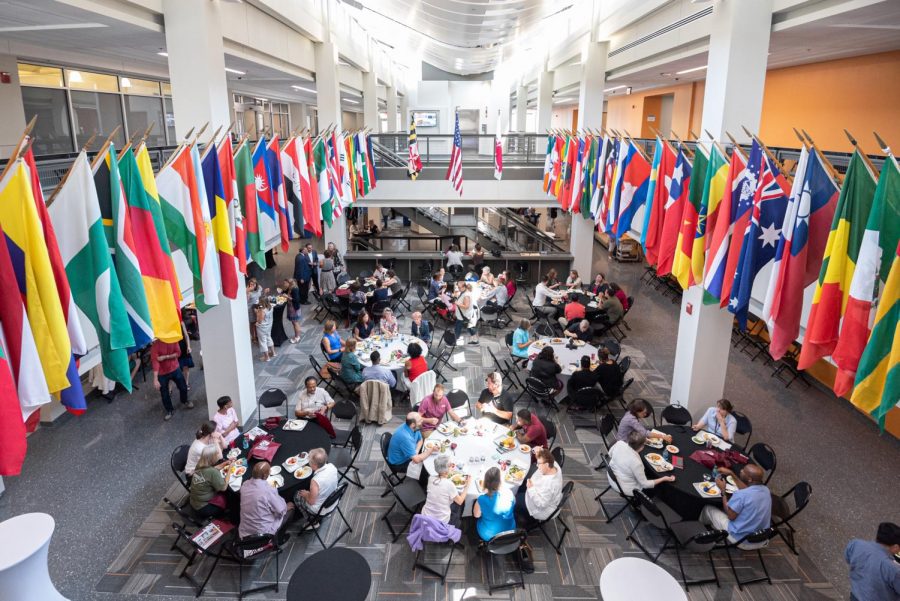 The West Galleria during its ribbon cutting

Burrill Galleria for returning students this Fall semester may feel a bit like the forbidden third corridor of Hogwarts – until recently being veiled in construction tarps and sealed off from passers-by, clubs looking to organize activities, and staff alike. For new students on campus, and keeping with the Harry Potter theme, the Galleria is practically the equivalent of being awarded 100 house points right from the start. The space serves as an invaluable resource, allowing room for group collaboration, a viewing area for any events requiring an absolutely massive screen, and a sanctuary for snack seekers at “The Spot”. The wait was lengthy, but certainly worth it. Personal utilization of the Galleria before the construction began was dismal, but I was pleasantly surprised to spend a morning basking in its fresh and sprawling glory. Easily accessed from the East Garage, Clark Library, the new Howard Hall, and the Quad, the Galleria exists as the perfect spot to take a load off in between classes. Being able to participate in the many exciting activities to be planned in the area or plan a meeting with class mates are not only things to look forward to, but things that feel as if they’ve been energized and reinvigorated.

Natural light spills in from the tip top of the Galleria’s center making it a perfect place to give your eyes a rest from harsh fluorescents. The space can buzz with chatter from congregated students and can be still with contemplative ones all at the same time. The muted grays and soft orange hues make for an inspiring and welcoming area. It can be so tempting to put homework off until you’re at home, but buckling down while on campus is a sure-fire way to increase your productivity. Making use of the space here on campus can help you maximize your time in between classes and allow you the separation from home distractions.

The newly opened space has already served as home for some of the awesome welcoming activities here on campus. From holding an amazing spread for a morning of breakfast, musical themed bingo, to welcoming students by allowing them to design their own good-luck bamboo sticks for the start of a new year, the Galleria is already being filled with happy memories and  is sure to keep that trend rising as we move through the year.