The first in a series of International Film Festival reviews 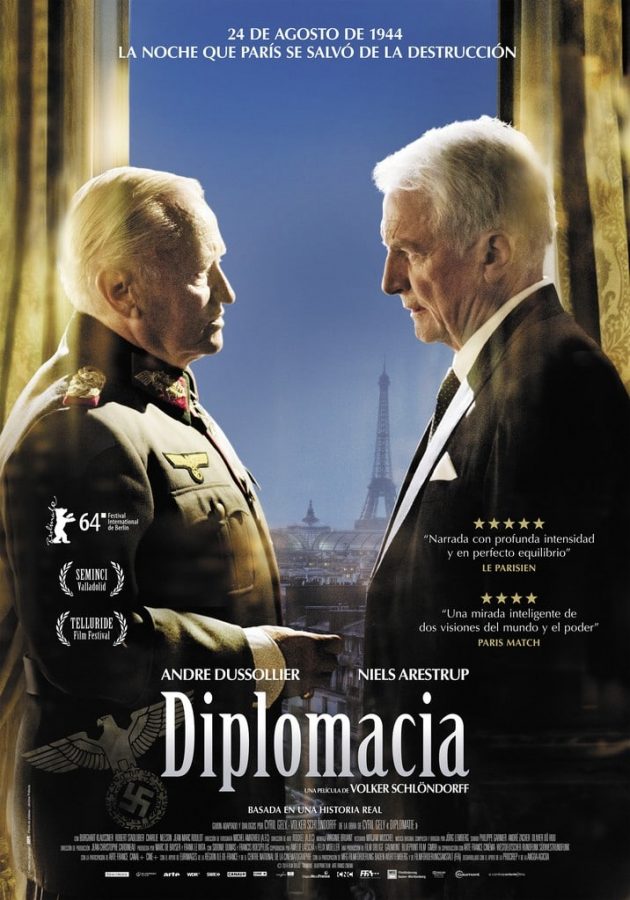 This week, November 18th – 22nd marks the beginning of Howard Community College’s International Film Festival!  Each night, the college is screening a different international film that’s been on the festival circuit in the past few years, each intended to follow a specific theme.  The theme of this year’s festival is “power”, and there are five French films for the week that are based on this theme: Diplomatie, Un Prophet, Belle et la Bête, Au Revoir la-Haut, and Baxter.  These are being screened at 12:00 PM and 7:00 PM each day this week in the Monteaboro Recital Hall. Each night, I will be writing a brief review of the film screened, describing how it fits the theme of power and contemplating how this might have a message for our wider campus community.  Enjoy!

The first film of the International Film Festival is Diplomatie, a French film originally released in 2014, directed by Volker Schlondorff, and based off of a play by the same name.  The plot takes place in August of 1944 and is about a Nazi General, Dietrich von Choltitz, who is in charge of occupied Paris and has been given the order from Berlin, in light of the recent allied approach on the city, to bomb and destroy Paris entirely so as to block the allies from advancing further.  Complicating his decision is the Swedish consulate, Raoul Nordling, who, despite not holding any military power, is determined to convince Choltitz to disobey his orders and leave the city intact.

One of the biggest strengths of this film is the dialogue.  As it was based on a stage play, there are many long scenes that continually occur in the same location and have primarily dialogue moving them forwards.  Once the main premise has been established and the two lead characters introduced, the heart of the movie becomes a discussion and debate between Choltitz and Nordling about whether Paris should be bombed or not.  The conversation has many different sides to it, with discussions ranging from the nature of authority and tradition to the Biblical story of Abraham almost killing his son Isaac. Both main actors, Andre Dussollier and Niels Arestrup, sell their characters very convincingly, with Dussollier effectively portraying a man forcing himself to ignore the real moral damage of his actions out of fear of admitting them, and Arestrup portraying a man desperately trying to save the city he loves while unable to use anything other than argument and tact.  While this dialogue-based approach carries most of the film very effectively, with different twists and turns of the information revealed changing the whole conversation’s focus and scenes outside of the main two characters occasionally breaking the repetition, it does carry on a bit in a few scenes. A lot of the long opening stretch, occurring after the set-up is introduced and before the conversation starts turning, is very effective at establishing the characters but also becomes very repetitive and harder to focus on. While this is a small downside, it still can affect the film’s ability to reach viewers.  The other major downside is the fact that the viewer inevitably already knows some of the endings. In the Second World War, Paris was never entirely destroyed beyond repair. While this removes some tension from the film, as the viewer knows that Paris will be fine, it is a testament to the film’s writing that the “how” leading up to Paris’s survival is made more interesting than the actual conclusion.

Outside of the acting and writing, this is a well-made film.  The cinematography enhances the feelings of discomfort and claustrophobia that the plot calls upon, the lack of music in many scenes enhances the feelings of starkness, and editing switches from a frantic pace and a painfully slow pace, leading the viewer to experience the very tension that the characters themselves are.  Despite occasional weaknesses, it is overall a very well-made film.

This film fits into the theme of power in a myriad of ways.  The first and most obvious is that of power over the fates of millions of people.  In this film, the fate of every citizen living in Paris is in the hands of a Nazi officer who has the power to decide whether they will live or die.  Of course, during the Second World War, this was not an unusual situation. The war was a struggle overpower, and there were many situations where people held the power to decide whether innocent people lived or died, such as in concentration camps or in the dropping of the atomic bombs.  Both of these events are touched upon in this film as well (since the atomic bombs had obviously not dropped yet, a character instead has dialogue that intentionally makes the viewer think of them). As such, the viewer is constantly reminded of the real consequences of this power over life and death being misused, causing the viewer to feel the conflicts and concerns of the film on a more personal and real level.  In addition, there is moral power. As the main characters discuss Paris’s potential discussion, they discuss whether morality or authority has or should have the most power or influence over actions and the world, and ultimately discuss whether morality or fear has the power over our actions. Finally, there is the idea of psychological power. While Choltitz has the literal power over Paris and over his actions, there are two psychological forces influencing him- that of Nordling, using morality to convince him of the wrongness of such actions, and that of Berlin, using threats to influence him to follow orders.

These conceptions of power have important lessons for all types of people, including the members of this community on and around our campus.  Physical power over life and death, when it is in the wrong hands, is something that a lot of people only think about in disconnected terms, as though it is something that is in the past or in other countries and communities.  However, with dictatorships spreading around the globe, violent movements such as the alt-right rising in popularity, and certain demographics being targeted by our government and by hateful people, it is important for all of us to remember the consequences of what can happen when that power is held.  One thing that this film does effectively is it allows the viewer to really feel and understand the landscape of the Second World War and how fascism was able to rise, and this reinforces the possibility of such things occurring whenever there are not safeguards in place. In Howard County and at HCC, this is still an important message- there are many people in varying minority demographics who have reported harassment, threats, and feeling unsafe in our community, and organizations such as ICE, that unfairly target immigrants, are occasionally active in this community.  It is important for everybody, therefore, to remember the very real consequences of too much power in the wrong hands.

On a much less heavy note, Dipolmatie explores the idea of personal power — especially the idea that one can give someone power over themselves.  In the movie, we see this with Choltitz’s decision essentially being a moral power struggle between Nordling and Berlin; whoever holds the most influence determines his decision.  In a much smaller and less severe manner, we can see this in our campus community as well. Oftentimes people, especially but not limited to college students, are too eager to give their personal power and their choices away.  This is not to say that asking friends or peers to give advice or input is bad, but occasionally it can get to a point where someone’s personality, habits, well-being in school, and activities are all essentially chosen and influenced by one or more outside sources.  With social media attempting to influence young people to live their lives a certain way, this occurs more often than ever. The film merely brings up the fact that choices can be influenced, and this power is indeed one that’s important primarily to be aware of. Whether you let others choose for you or not is one of the few choices nobody else can make, but it’s important to know that it is a choice at all.

Finally, this film has the theme of altruistic morality against authority and which is more important.  The film ultimately concludes that altruistic morality is more important than authority, as it is what saved Paris when authority attempted to destroy it.  This is an important message for people as well. Ranging from politics to interpersonal lives, it can be easy to allow somebody else to “take charge” of your morals- whether a radio personality speaks in a convincing way, or a politician says that one thing is right or wrong, or a friend tells you that a certain action is “unAmerican”.  While it’s an entirely good thing to allow others to expand our ideas of morality and show us other moral points of view, it’s always important to remember that what causes the most good and the least amount of harm is not always what a person in a position of power or influence over us says. It’s necessary to not simply decide what we think is right or wrong from what somebody we trust or usually agree with says is right or wrong, but to decide after heavy thinking about newly introduced ideas.  In this and previous manners, the film has a theme of power that carries several messages, ranging from the very large to the very small, out to the larger campus community.