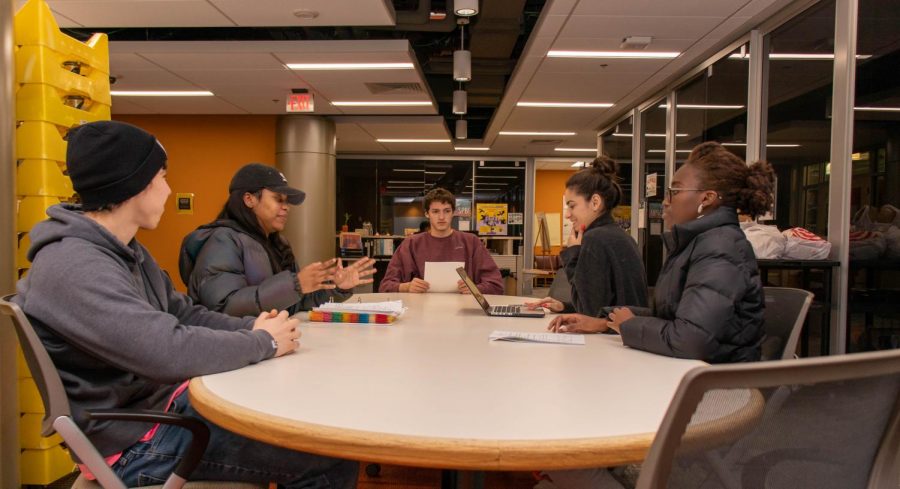 On Oct. 30th, a fated Wednesday, SGA held the General Assembly Meeting. This was a new way for the students at Howard Community College to voice their opinions, concerns, and any questions they had about their beloved college. The SGA members, Andrew Baker, Amelia Perez-Roldan, Avy Rohr, Alexander Casserly, Jazmia Perry, and Tamara Dowding, gathered information from the numerous Dragon Talks held by the clubs to really answer the question: What do all of you think about HCC?

After greetings were exchanged, the meeting commenced and it was extremely interesting.

The main speakers, Perry and Baker, first discussed what the students liked about HCC. The comments ranged from “good resources”, “great environment” to “positivity at the front door”, “great teachers”, “better than a 4-year school”, and more. However, SGA also chose to include the top three likes of the HCC students. Ranking first was “friendly staff and campus life”, then “great variety of student service resources available on campus”, and finally “very diverse campus”. The attendees of the meeting were informed that the top three likes were brought up frequently in the Dragon Talks that were held. We were able to see that we all share the same views about HCC.

The likes discussion did not stop here, of course.

Perry and Baker then asked the attendees of the meeting if they wanted to include anything about what they personally liked about HCC.

This is a great opportunity for all of the clubs that attended to voice what they found satisfactory, but I do not think that this opportunity was used well. The attendees spoke about how they liked the “protocol in the silent zone”, the “cleanliness” of the college, the “library’s selection”, the “faculty that treats you like you’re human”, and more. These are lovely comments, but is the protocol going to help us students in the future? For example, when we transfer or graduate from HCC? I respect everyone’s opinion, I really do, but I started to become disappointed that this was what we as students were focusing on. Some of the likes made sense, I agreed with them, but some of them did not need to be talked about, in my opinion.

As the meeting progressed, the discussion about what people disliked about HCC ensued. Comments, presented by Perry and Baker, ranged from “some areas need air fresheners”, “need more events”, “problems with the admissions office” to “need free deodorant”, “parking”, “more diverse scholarship opportunities”, and more. The top three dislikes were “THE WIFI”, “food prices are too expensive and the diversity of the food is lacking”, and “more advanced computer programs”. The attendees then spoke about the beloved “library selection being too small”, “virtualize SGA”, “different ways to promote HCC’s clubs and services”, “more outlets in the cafe”, “include more food options”, and more.

In my opinion, I’m mostly angered at some of the comments. SGA can only do so much because they are a student organization.

The clubs that attended already know that SGA does not have all of the power in the world.

So, it makes me wonder why most of the meeting was the attendees basically insulting how SGA operates and how HCC needs more food options? I get it, everyone has something that they deem as the most important to them, but is the choice of food at a college really going to hinder your education that much. One attendee stated the SGA’s club showcase “failed” to help the numerous clubs at HCC. This attendee is only one person in the vast student population in HCC, but they chose to be rude and generalize the situation.

An instructor, mentor, and professor intervened, “You all should be taking advantage of the political strength that you gain with your clubs and with SGA. It’s not just about food.” Everything he said was correct and I hope that each club or club representative that attended this meeting took this advice to heart. We all need to jump at the opportunities we’re handed.

Unfortunately, a worrying concern was brought up: the “promotion of HCC services is lacking”. This is a great example of how to voice a universal concern especially when the SGA members agree that this is a serious concern as well. “HCC has so many resources that students don’t know about, so one of our goals is the need to find outlets to promote resources,” Perry says. SGA is working so hard for the student body, they should not be doubted or insulted, but thanked for all that they do.

As infuriated as I was, I believe that this meeting went well.

President Baker states, “The turnout could have been better, but people still had a chance to voice their opinions. I think it went okay.”

This meeting was fairly open, everyone was allowed to speak and say what they wanted to say.

Student responses varied between helpful and unnecessary, but it was still an overall success for the SGA members. This was their first official General Assembly Meeting and they are planning to have one each month. We all have a right to voice our opinions, no matter who disagrees with us. So, if you believe that HCC has lived up to its standards, or you might not come to the next meeting on Nov. 20th at 3:30 pm in the Burrill Galleria.

The General Assembly Meeting allows you to see everyone else’s perspectives about HCC and determine how they differ or reflect your own perspective. So, come discuss what you think about HCC and eat while you’re at it (do not only come for the food if there is any). I am sure that SGA appreciates your participation!