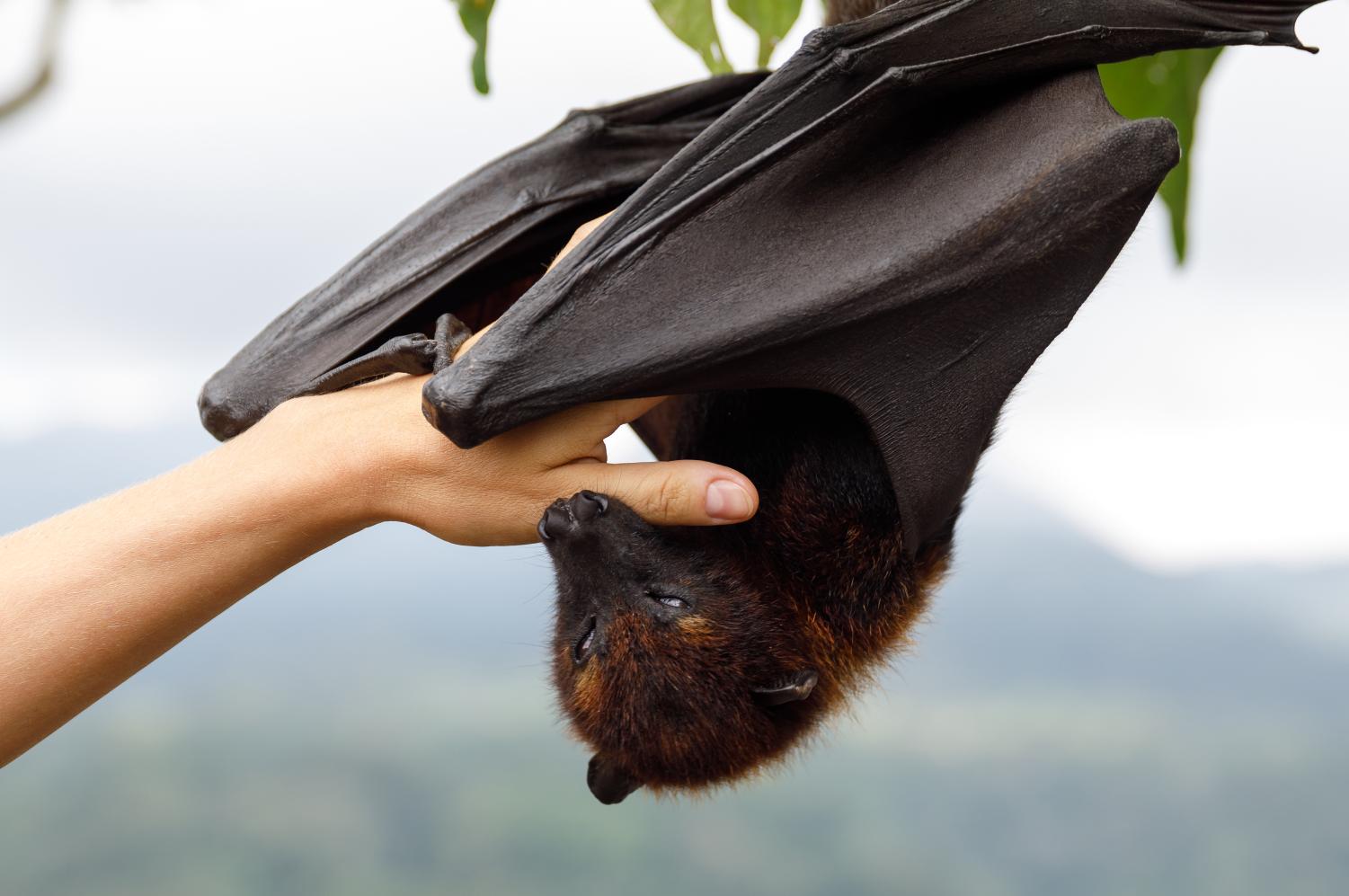 A flying fox nestles itself into a warm, gentle hand. (PublicDomainImages)

A flying fox nestles itself into a warm, gentle hand.

Blooming by the light of the moon, a lone white flower breathes out a concoction of scent into the cool night air, a silent signal sent to its surroundings. The petals shimmer in a fragrant cloud as a gentle breeze passes by. An outline of a faint shadow traces itself onto the ground; there is movement in the air. A soft sound of fluttering follows. While the world sleeps, a bat has followed its nose to food at last, nectar.

Although their senses of smell are keen, many bats also locate flowers through an amazing ability called echolocation. When a bat uses echolocation, it emits pitches of sound from the mouth or nose, then listens to how the sounds bounce off of anything nearby. Similar to sonar in submarines, when the soundwaves ricochet and return to its ears, the bat instantaneously processes the information and gets a read of its surroundings. Tones hitting flowers of varying shapes and sizes offer subtle acoustic variation that can be processed, understood and distinguished seamlessly. It is believed the forms taken by bat-pollinated flowers distinctly interact with inbound soundwaves, thus providing unique patterns recognizable through echolocation.

Contrary to popular belief, bats are, in fact, protecting our blood, not after it, mammalian guardians in pursuit of vampiric mosquitoes. The functionality and precision of echolocation can pinpoint ultra-tiny flying objects zipping through the air in real-time, resulting in bats often consuming over half of their bodyweight in insects within a single night’s hunt! Bats’ ravenous appetites and aptitude as hunters saves the agriculture industry billions of dollars a year as nightly feasting regulates and checks populations of pests. With less pesticides being sprayed, smaller amounts of poisons are washed into aquatic ecosystems and underground aquifers when it rains. The health of our rivers, streams, oceans and drinking water is, as such, directly and significantly influenced by bats.

With more than 1,400 bat species worldwide, and only less than one percent of those species being carnivorous, bats make up almost a fifth of the diversity of mammals on earth. The smallest mammal (and bat) in the world is the bumblebee bat, weighing only two grams and, as its name suggests, the wee size of a bumblebee. The largest bat is the golden-crowned flying fox, a megabat with a wingspan up to five and a half feet wide—the size of a fully grown person.

Many bats are nocturnal pollinators, offering pollination and seed dispersal services to hundreds of species of plants, including some of our food crops, like mangoes, bananas, and cacao—a key ingredient in chocolate. Similar to bees, bats get pollen all over their hairy bodies when drinking nectar from flowers. Pollen gets transferred to new flowers in sequence, often miles away, resulting in fruit production and the hopeful proliferation of future generations of plants. The straw-coloured fruit bat (Eidolon helvum) is, as its name suggests, a frugivore; it pretty much only eats fruits and seeds. Like cargo on a plane, the seeds reside inside the gastrointestinal tract of the fruit bat until it’s time to poop! Wherever the bat happens to be, the seed is deposited in a package of guano, an excellent fertilizer full of nutrients to help a baby plant become established in a new location. Imagine rainforests ravaged by deforestation, and thousands upon thousands of fruit bats flying through the open fields, depositing tree seeds in their search for fruit, promising hope for future generations of life. The tears of terrestrials mark the ground of the stolen home, while the fruit bats fly and try to make things right.

Over 200 species of bats are considered endangered or threatened, and that number is expected to continue to increase dramatically. While deforestation destroys habitat—consequently constricting the availability of food, shelter and water—an even greater threat has already massacred bats by the millions: white-nose syndrome. White-nose syndrome is a disease caused by an invasive fungus which infects bats by attacking their skin during hibernation. Fungal growth colonizes its host and causes a fuzzy white film to develop on the nose and wings. It spreads by way of proximity, especially when bats huddle together in caves to stay warm. The fungus affects bat metabolism, causing critical fat stores to be burned up at an accelerated rate, as well as changes in behavior, like premature awakening from hibernation. Waking up early turns deadly; without a food source in the frozen, snowy landscape, bats starve to death. The first documented appearance of white-nose syndrome in North America was in New York in 2006. It has been ravaging populations of bats ever since. The United States Geological Survey cites a scientific conservation study which has found that “white-nose syndrome has killed over 90% of northern long-eared, little brown and tri-colored bat populations in fewer than 10 years.” Three species of bats brought to the brink in less than a decade. This dire downward spiral calls for immediate action, but what can we do?

Looking at a forest in Maryland, it is easy to think there are plenty of trees—trees for birds, bats, squirrels, and everything else. A bird’s-eye-view offers a different perspective; our neighborhoods, streets, sidewalks, buildings and developments stand atop terrestrial graveyards: miles upon miles of land that trees, plants, and animals used to thrive on, positively teeming with life and biodiversity. Like shards of broken glass, smaller pieces of habitable space remain, but others have been shattered beyond repair. Manmade fragmentation of habitat has caused tremendous decline of bat populations worldwide. Fortunately, there is a way to restore some of what has been lost.

Bat houses are precisely what they sound like, basically bird houses for bats. They provide roosting sites for bats to raise their young and occupy. Depending on the region (and thus climate) a person lives in, bat houses are painted different colors to absorb and retain varying amounts of heat, promoting the ideal temperature for a bat. Their wooden interior walls are texturized to allow bats to adhere to the inside. They tend to attract more tenants when placed in certain conditions, like against the side of a building or mounted on a pole. Proximity to a water body, like a stream or river, also tends to increase occupancy.

Dr. Merlin Tuttle, a real-life batman, introduced bat houses in 1982. He has dedicated his life to bat conservation, with efforts to reshape the hearts and minds of the masses to appreciate and accept bats as friends, not foes. In the 1980’s, citizens of Austin, by general collective consensus, sought to put an end to the lives of more than a million city-dwelling bats that were deemed pests and considered a nuisance. What today has become the greatest spectacle and source of tourism in the city was then on the table for a sanctioned extermination. Tuttle’s unconventional perspective—that these animals are important, need to be here, and have a purpose—combined with hard facts painting bats as crucial benefactors to the ecosystem and economy convinced the local government to spare the largest urban bat colony in the world. The death of an entire population of bats calling the underside of Congress Bridge its home was completely averted, with 1.5 million lives saved. “Merlin Tuttle Day” is now officially celebrated in Texas to commemorate their rescue.

Two bat houses are hidden away and mounted right here at HCC. If inhabited, we have been sharing our campus with bats for years. While habitat shrinkage combines with devastating disease to cripple bat populations worldwide, what will we do? As stewards of the land, the pressing responsibility falls on us to conserve, preserve and care for the world around us, for the sake of all the animals without a voice and for all generations to come. We have the choice, capacity and ability to make a difference; it can be as simple as putting up a bat house.

Beneath the fading light of the moon, a pale white flower begins to fold its petals inward as night welcomes dawn. A fluttering form flies away, framed in black against the starry sky. Trails of scents twist and turn, leading this way and that. Soon the sun will begin to rise. A lone bat follows its nose, releasing sounds from its mouth wherever it goes. The wind sighs. After a night of foraging, a new search has begun for roost and rest. Where will the bat go? 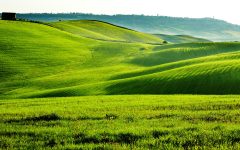 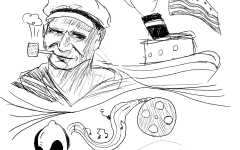 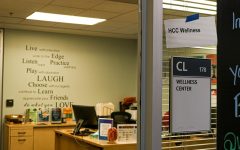 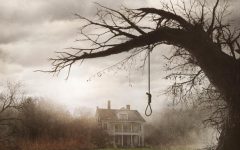